Who Cares About Medical Blogs? The Video Answer of a Medical Media Company

Medical blogging is generally a good thing but of course it has its own critics.

George D. Lundberg, M.D. is the Editor-in-Chief of the online Medscape General Medicine and he asks Is There a Place for Medical Blogs in a Medical Media Company? (you need a free Medscape registration to see the video). His answer seems to be "no" because "A blog may well be ultimate communication anarchy... the blogger may be the author, editor, publisher, advertiser, critic, reviewer, and owner -- all at the same time -- and fake the whole thing". Hmm... Is Kevin, M.D. fake? How about Robert Centor? I don't think so. I respect Dr. Lundberg's opinion but it reminds me of the person who claimed that podcasts are just "streaming audio". It is much more than that.

The issue of credibility is resolved the Scoble's way - by including your name, email and phone number on your website. Robert Scoble is a Microsoft employee and probably one of the most famous bloggers in the world. 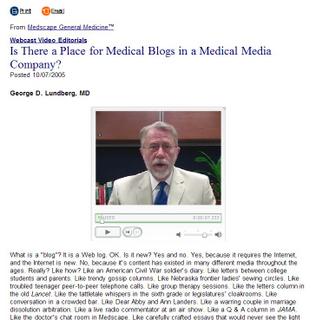 Medical blogs are part of the Web 2.0 phenomenon. The "face" of Web 2.0 are tools like Feeds/RSS, Blogs, Podcasts, AJAX, and DHTML.

It looks like "Medscape is starting its own medical student blogs. Perhaps Dr. Lundberg had a change of heart?", writes Kevin, M.D.

Medscape prominently features an article series about the hosts of Grand Rounds called Pre-Rounds on its front page. Grand Rounds is a weekly summary of the best posts in the medical blogosphere.

Peter Frishauf, the founder of Medscape says that "a variant of Wikipedia for medicine is the future -- and it's good."

I contribute to Wikipedia, do you?

Web 2.0 creates a whole new environment which is an example of Darwin's theory of evolution. You have to adapt to survive in the new economy of Web 2.0.

References:
(via KidneyNotes)
Is There a Place for Medical Blogs in a Medical Media Company? Medscape
But it's not NEW! - Evhead
Lundberg on blogs - DB’s Medical Rants
Are Traditional Peer-Reviewed Medical Articles Obsolete? Medscape
Make the Largest Encyclopedia in the World Better. I already did (I hope)