This is a collection of articles I have found interesting in the weekly editions of the "big five" medical journals: NEJM, JAMA, Annals, Lancet and BMJ (a few more journals are included occasionally). The review is a weekly feature of Clinical Cases and Images - Blog. Please see the end of the post for a suggested time-efficient way to stay up-to-date with the medical literature.

"When I entered medical school at 26, I was considered to be a nontraditional student — but I was hardly alone."

Advances in perinatal care have increased the number of premature babies who survive. There are concerns, however, about the ability of these children to cope with the demands of adulthood. In a cohort of 903,402 infants in Norway, the risks of medical and social disabilities in adulthood increased with decreasing gestational age at birth.

Lipids, lipoproteins, and apolipoproteins as risk markers of myocardial infarction in 52 countries (the INTERHEART study): a case-control study.
The Lancet 2008; 372:224-233.

Whether lipoproteins are better markers than lipids and lipoproteins for coronary heart disease is widely debated. In a study of 12,461 AMI cases, the non-fasting ApoB/ApoA1 ratio was superior to any of the cholesterol ratios for estimation of the risk of acute myocardial infarction in all ethnic groups, in both sexes, and at all ages, and it should be introduced into worldwide clinical practice.

Effect of dimebon on cognition, activities of daily living, behaviour, and global function in patients with mild-to-moderate Alzheimer's disease: a randomised, double-blind, placebo-controlled study.
The Lancet 2008; 372:207-215.

Dimebon was safe, well tolerated, and significantly improved the clinical course of patients with mild-to-moderate Alzheimer's disease. Dimebolin Hydrochloride (Dimebon) is an antihistamine drug which has been used clinically in Russia since 1983.

Ginkgo biloba and fish oils through lecithin and vitamin concoctions supposed to aid concentration, improve memory, and boost IQ. Sadly, a cool look at the evidence suggests that none are particularly helpful.

The American Academy of Pediatrics has issued new guidelines on cholesterol screening and treatment recommendations in childhood: a fasting lipid profile is recommended between the ages of 2 and 10 years for children with a family history of high cholesterol or premature heart disease.

The first use of penicillin in the United States occurred in 1942 and saved a moribund patient who had β-hemolytic streptococcal sepsis.

High blood pressure in middle age is a well-established risk factor for cardiovascular disease, but the consequences of low-level elevations during young adulthood are unknown. Prehypertension during young adulthood is common and is associated with coronary atherosclerosis 20 years later. Keeping systolic pressure below 120 mm Hg before age 35 years may provide important health benefits later in life.

Bullous pemphigoid and pemphigus vulgaris—incidence and mortality in the UK: Increasing.
BMJ 2008;337:a180.

In this cohort of 970 patients with acute low back pain in primary care, prognosis was not as favourable as claimed in clinical practice guidelines. Recovery was slow for most patients. Nearly a third of patients did not recover from the presenting episode within a year.

A British medical student discovered some surprising similarities on a recent visit.

1. Subscribe to the RSS feeds of the 5 major medical journals (NEJM, JAMA, BMJ, Lancet and Annals) plus 2-3 subpecialty journals in your field of interest. 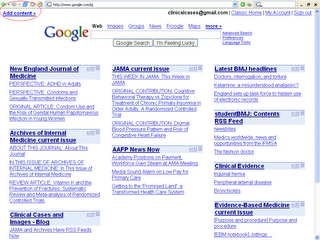 3. Use text-to-speech to listen to the articles you do not have time to read.