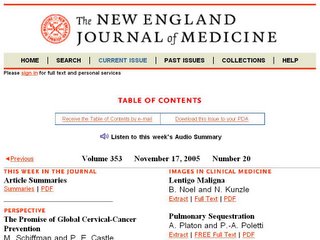 References:
I will be attending NEJM Horizons Conference to push the boundaries of traditional medical publishing, suggestions welcomed
NEJM is a Journal (Only) No More
NEJM Image Challenge and (Lack of) Wisdom of Crowds
Using Twitter to Microblog a CME Meeting
All images (excluding the NEJM.com screenshot) are in the public domain.
Posted by Allergy on 12/18/2008