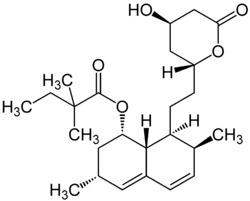 Based on review of data from a large clinical trial and data from other sources, the U.S. Food and Drug Administration (FDA) is informing the public about an increased risk of muscle injury in patients taking the highest approved dose of the cholesterol-lowering medication, Zocor (simvastatin) 80 mg, compared to patients taking lower doses of simvastatin and possibly other drugs in the "statin" class.

The muscle injury, also called myopathy, is a known side effect with all statin medications. The most serious form of myopathy is called rhabdomyolysis. Patients with myopathy generally have muscle pain, tenderness or weakness, and an elevation of a muscle enzyme in the blood (creatine kinase). The higher the dose of statin used, the greater the risk of developing myopathy. The risk of myopathy is also increased when simvastatin, especially at the higher doses, is used with certain drugs (see Simvastatin Dose Limitations below).

New data also suggest that people of Chinese descent should not take Zocor at the 80 milligram dose -- and should be careful even when taking lower doses -- if they also take niacin-containing products.

These limitations apply to ALL patients taking simvastatin.

Do not use simvastatin with these medications:
Itraconazole
Ketoconazole
Erythromycin
Clarithromycin
Telithromycin
HIV protease inhibitors
Nefazodone

Do not use more than 10mg of simvastatin with these medications:

Do not use more than 20mg of simvastatin with these medications:

Do not use more than 40mg of simvastatin with this medication: