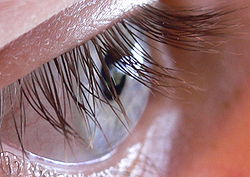 From the NYTimes:
Latisse is the same formula as Lumigan, Allergan’s eyedrops for glaucoma, which reduces eye pressure but also happens to grow lashes. Both are also known as bimatoprost ophthalmic solution. In early 2009, Allergan introduced the drug as a lash enhancer.

A former primary care doctor runs www.latisse.bz, which boasts that it is the “largest Latisse retailer.” All it takes to get Latisse mailed out — without ever seeing him — is filling out a medical history, which he reviews, and typing in a valid credit card number.

But if people use Latisse without seeing a doctor, the side effects may come as a big surprise.

Eyelid discoloration “may be reversible” according to the manufacturer. A rare side effect that has captured the most attention is the chance that one’s hazel or blue eyes could turn brown — forever.

Labels: Ophthalmology
Email ThisBlogThis!Share to TwitterShare to FacebookShare to Pinterest