Acupuncture Is Popular with Patients but Insurance Does Not Cover It 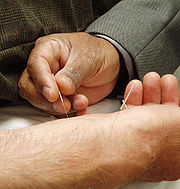 Because her insurer did not cover acupuncture, Ms. Kumar had to pay for the $70 weekly treatments she hoped would put her cycle on a more normal schedule.

Acupuncture remains a largely out-of-pocket form of health care. Sessions with an acupuncturist run about $65 to $120, depending on where you live (and some leading acupuncturists charge as much as $300). Most ailments require at least three treatments, while some chronic issues like arthritis might require biweekly or monthly sessions, depending on the situation.

Patient Money - Acupuncture May Help, but You’ll Need to Pay - NYTimes.com.
Acupuncture can spread serious diseases: bacterial infections, hepatitis B and C, even HIV
Does traditional Chinese medicine have a place in the health system? http://goo.gl/RH04o
Image source: Needles being inserted into a patient's skin, Wikipedia, public domain.
Posted by Author on 11/18/2010

Labels: Acupuncture
Email ThisBlogThis!Share to TwitterShare to FacebookShare to Pinterest