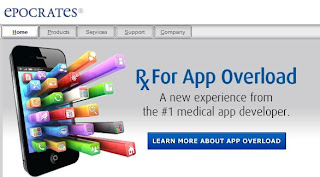 Epocrates drug reference app has won over 50% of U.S. doctors. But like so much else on the Web, “free” comes with a price: doctors must wade through marketing messages on Epocrates that try to sway their choices of which drugs to prescribe.

The marketing messages are difficult to ignore. For example, a psychiatrist who recently opened Epocrates on his iPhone said that before he could look up any drugs, he had to click past “DocAlert” messages on hypertension, bipolar disorder and migraines.

Epocrates says drug makers get $3 in increased sales from every dollar spent on DocAlerts.

One in five doctors will not see drug sales representatives at work, and Epocrates sees DocAlerts as a way to get a sales pitch in front of doctors.

Pharmaceutical companies provide at 70% of Epocrates’s revenue, which totaled $104 million last year. According to the former CEO: “It is a unique market. You have a drug industry that spends $14 billion a year to influence people who prescribe drugs. There are only 600,000 people who are allowed to prescribe drugs, so there is $14 billion spent against 600,000 people ($23,333 per U.S. physician). If you have a channel to reach these physicians, it is a gold mine.”

I use the online version of Epocrates. It is free and has a useful integration with a clinical evidence reference database provided by BMJ which works similarly to UpToDate. There are no DocAlerts that you need to click through to access the website.

The Epocrates App Provides Drug Information, and Drug Ads. NYTimes.
"Cocaine for toothache" and other ads that would never be allowed now http://goo.gl/eeYX3 - Cocaine was sold over the counter in the U.S. until 1914.

Comments from Google Plus:

Darin Swonger - Palm or now HP and Epocrates parted ways and is now not supported with my Palm Pre, therefore, I have been using Medscape Reference and have found it to be adequate in most areas and better in others.

Ellen Richter - Gee, I use it every day & I've I never had a problem with the app due to ads getting in the way. I dont even recall seeing any ads! Do you think its because I'm not a doctor? It asks for your profession at registration, so I specified that I am a nurse. For once, could that be a benefit!!? :)

Nancy Onyett, FNP-C - It is the confidence to look past the drug ads, just like immunity to drug reps that hound me on a daily basis. I only practice from EBM and guidelines then I am protected. New drugs to the market are always a worry, they have been trialed and FDA approved, they are more costly to patients and the outcome is still muddy until they have been around awhile. I personally like to use the older drugs that have been around with subsequent studies proving their efficacy.
Posted by Author on 10/31/2011