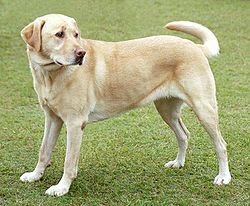 Mitochondrial genetics studies have shown conclusively that dogs have descended from wolves. Dogs' genes are 99.8% the same as the wolf genes, yet dogs behave in a fundamentally different way.

Over more than 100,000 years dogs have evolved to recognize human emotions. It has been a collaborative process all along. Humans are able to recognize 6 types of dog barks expressing emotions and "intentions" such as fear, excitement, aggression and so on. Dogs are the only animals that specifically look at the right side of the human face where emotions are expressed (see the NOVA video and website below).

Dogs follow directions while chimpanzees, the apes evolutionary closest to humans, do not. The smartest dog can learn 300 different words which is the vocabulary size of a 2-year-old child.

According to a Cleveland Clinic psychologist, "dogs could be called wonder drugs":

"Dogs can provide people with many things. Protection, friendship, and unconditional love top the list, but they may also provide health benefits, too." How smart are dogs, and what makes them such ideal companions? Dogs Decoded: Nova. Netflix. Comments from Twitter: Heidi Allen @dreamingspires: I want one! References: Dogs Decoded transcript and more. NOVA. Image source: Yellow Labrador Retriever, Wikipedia, GNU Free Documentation License.
Posted by Author on 4/09/2012