Drug abuse is changing fast: Old drugs are falling from favor, new ones are growing

In recent years, hundreds of new drugs have appeared on the recreational drugs market in Europe and the U.S. New psychoactive substances, mainly stimulants and cannabinoids from China sold on the internet, proliferate too quickly for anyone to keep track of them. Websites such as Erowid.org create lists of those drugs.

It is all part of the rapid diversification of recreational drugs, fuelled by chemical ingenuity and by new distribution possibilities opened up by the internet.

New drugs of misuse, including ketamine, gamma-hydroxybutyrate (GHB), and a range of synthetic stimulants, have become part of global recreational drug culture. Use in combination with other substances (especially alcohol) is common and increases the associated health risks.

"Talk to Frank" is a British government-funded website for drug abuse prevention and treatment tips for the general public available at http://talktofrank.com

The "A to Z" list of substances explains appearance and use, effects, chances of getting hooked, health risks and the UK law. It also includes information on peer pressure, etc. 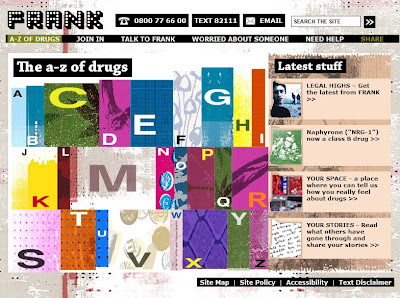 Drug use and abuse. The Economist, 2011.
New recreational drugs and the primary care approach to patients who use them. BMJ, 2012.
U.S. says drugged driving growing threat. Reuters.
Am I driving a car? Drunk motorist stuns police http://goo.gl/D9NOa
Drunk Driving, Distracted Driving, Moralism, and Public Health - NEJM
30% of U.S. adults have been arrested by age 23: study. Reuters, 2011.
Posted by Author on 3/21/2014