Google has just entered the field with Reader. It is a rich AJAX application which was launched today. It looks like the product still has a few bugs though. Isn't Google starting to look more and more like Microsoft? At least you do not have to install the software, it is online-based... :-). You need a Google/Gmail account to use the reader. You can also subscribe to podcasts and the audio player is embedded. 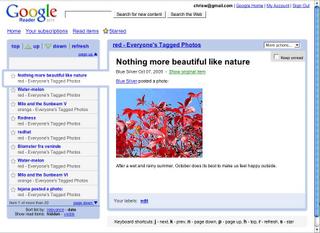 Bloglines - everyone's favorite, it also has an excellent mobile version. Bloglines lets you publish a blog easily from your feeds. Google Reader is integrated with Blogger, of course.

Rojo - it looks nice and colorful but it is more difficult to navigate. Rojo also pre-populates your subscriptions with their suggestions and then you have to unsubscribe if you do not like them. It almost makes you to say: "Let me choose for myself please".

Findory - similar to Bloglines, you can import your subscriptions but it has a bit too much AdSense ads. Update 9/30/2007: Findory shuts down on November 1, 2007. Geeking with Greg.

SearchFox - not very impressive. It has a "self-learning" feature (like Findory) which is supposed to offer you similar stories on the basis of what you read but I am yet to see any real benefit from that approach.

Whatever you choice is, it is easy to get so used to your RSS reader that you keep on checking for updates every half an hour or so. Do not get over 100 subscriptions because you will not have time for anything else and than you have to put an end to it cold turkey, just like Russell Beattie did. He reached a saturation point in terms of information flow, so he deleted all his 450+ Bloglines subscriptions...