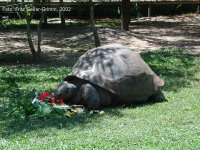 The late Harriet was a 176-year-old tortoise, believed by some to have been owned by Charles Darwin. She died peacefully in a Queensland zoo owned by Steve Irwin, the Crocodile hunter.

According to the zoo veterinarian quoted by CNN:

People have heart attack at age 76 (and often much earlier), for Galapagos turtles the risk age seems to be 176...

Labels: Animals
Email ThisBlogThis!Share to TwitterShare to FacebookShare to Pinterest