Shortly after 11:00am local time on 4 September 2006, Irwin was fatally pierced in the chest by a Short-tail stingray barb while diving in Queensland's Batt Reef. According to his friend and colleague John Stainton, who was on board Irwin's boat at the time, "he came on top of the stingray and the stingray's barb went up and into his chest and put a hole into his heart." 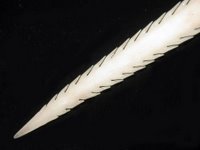 This was only the third known fatality in Australian history from a stingray attack, and only 17 worldwide fatalities have taken place since 1996.

Crewmembers aboard his boat administered CPR as they rushed the boat to nearby Low Isle to meet a rescue helicopter. Medical staff pronounced Irwin dead when they arrived a short time later. Autopsy identified that the stingray had badly damaged both the left atrium of the heart and the left ventricle which caused a great deal of stress for the heart and caused him to go into cardiac arrest.

His wife Terri was informed of her husband's death while on a walking tour in the Cradle Mountain-Lake St Clair National Park in Tasmania, and returned via private plane from Devonport to the Sunshine Coast with their two children."