DPP-4 Inhibitors for Treatment of Diabetes

Glucagon-like peptide-1 (GLP-1) is a GI peptide that stimulates insulin secretion (similar to sulfonylureas). GLP-1 also inhibits glucagon release, gastric emptying and food absorption. GLP-1 and another similar peptide are called incretins. As noted above, incretins have a dual action which leads to lowering blood glucose: 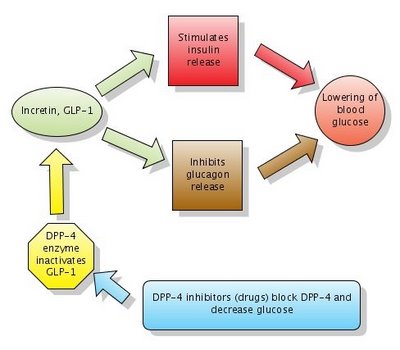 Exenatide (Byetta) is a GLP-1 receptor agonist approved for adjunctive therapy for patients with DM 2 who are not well controlled on oral agents. It is available only as injections and has to be administered twice daily.

They act similarly to Byetta (see figure above) but have the big advantage to be available in oral form (pills). These 2 new medications for treatment of DM2 are:

- Sitagliptin (Januvia) is taken once a day and it costs about $ 4.50 per pill