The case description and pictures are available on the NEJM web site:

"Adult onset of eosinophilic esophagitis is still not recognized by many practitioners. This condition is often confused with gastroesophageal reflux disease and is associated with esophageal strictures. The presence of more than 20 eosinophils per high-power field in an esophageal biopsy specimen is strongly suggestive of this diagnosis." 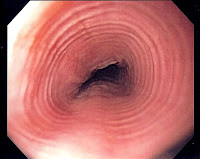 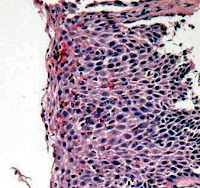 Although eosinophilic esophagitis is well-recognized entity in children, it is still underdiagnosed in adults.

A few months ago, I saw an adult patient with a multitude of unexplained gastrointestinal complaints who was referred to our tertiary care center as a diagnostic dilemma. She was diagnosed with an adult-onset eosinophilic esophagitis by us and did very well with swallowed Fluticasone. The full case description will be posted on ClinicalCases.org in the future.

I would like to point out the remarkable contributions to medical Wikipedia by Samir, a Canadian gastroenterologist. He has published a multitude of EGD, colonoscopy and biopsy images on Wikipedia under a GNU free license and in strict compliance with HIPAA. The NEJM holds a copyright of its text and images and having a free alternative via Wikipedia is an excellent addition.