Google Trends and Top Hospitals According to U.S. News and World Report

"U.S. News and World Report put 5,462 medical centers through progressively finer screens to create the 16 specialties rankings in the 2007 edition of America's Best Hospitals. Just 173 hospitals made it into the rankings, and of those, a mere 18 displayed the marked breadth of expertise, with high scores in at least six specialties, that qualified them for the Honor Roll."

Top 5 hospitals in the 2007 edition of America's Best Hospitals are:

The list correlates to some extent with the number of searches in Google Trends shown below: 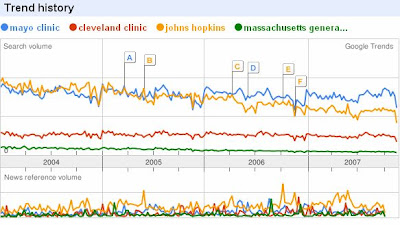 As a form of disclosure, I have to say I am proud to be on staff at Cleveland Clinic which has ranked among the top hospitals for many years.

References:
The Collusion between Media and Hosptials. Dr. Wes.
Cleveland Clinic Advances to Number 3 on the List of America's Best Hospitals. CasesBlog, 07/2006.
Microsoft Blogger Has as Much PR Power as CEO. What Does That Mean for Your Hospital? CasesBlog, 05/2006.