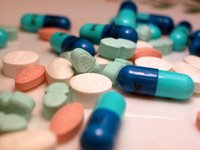 According to the Associated Press:

"A vast array of pharmaceuticals — including antibiotics, anti-convulsants, mood stabilizers and sex hormones — have been found in the drinking water supplies of at least 41 million Americans. The concentrations of these pharmaceuticals are tiny, far below the levels of a medical dose but the long-term consequences to human health are unknown."

The pharmaceutical industry points out the amount of medication in the water supply is the equivalent of a single pill in an Olympic-size swimming pool. Still, if you a have glass of water in Philadelphia, you are drinking tiny amounts of at least 56 medications.

CNN has a map of the affected metro areas and a video explanation of how drugs end up in tap water.

Labels: Nutrition
Email ThisBlogThis!Share to TwitterShare to FacebookShare to Pinterest