Rivaroxaban is an oral anticoagulant under development by Bayer; it will be marketed as Xarelto. It acts by inhibiting the active form of coagulation factor X (factor Xa). 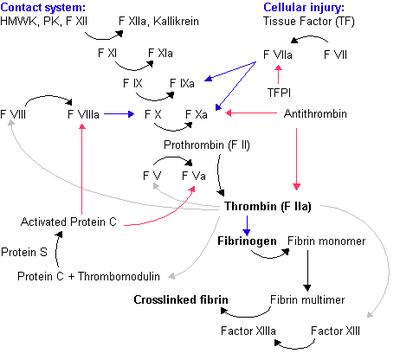 According to 2 NEJM studies, a once-daily, 10-mg oral dose of rivaroxaban was significantly more effective for extended thromboprophylaxis than a once-daily, 40-mg subcutaneous dose of enoxaparin (Lovenox) in patients undergoing elective total and knee and hip arthroplasty. The two drugs had similar safety profiles.

Due to the decreased need for monitoring, rivaroxaban is likely to be used to replace warfarin for a number of indications, such as atrial fibrillation.

A related drug, ximelagatran, a direct thrombin inhibitor, was not marketed further due to its potential side-effects, mainly liver toxicity.

An oral anticoagulant in the pipeline. Notes from Dr. RW: Was Lovenox dose intentionally too low (40 mg sq qd instead of 30 mg sq bid)?
Posted by Author on 6/26/2008