Does Michael Phelps have Marfan syndrome? 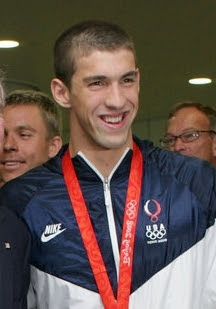 Michael Phelps holds the record for the most gold medals won at a single Olympics, a total of eight, and is arguably the best Olympic athlete ever.

With all NBC ads about "giant feet" and the highly publicized facts about his physical features, some of my colleagues pointed out that Mr. Phelps has quite a few features of Marfan syndrome.

His height is 6'4" and his arm span of 6'7" is greater than his height. According to Cleveland Leader, "that is a ratio of 1.04, which is just shy of the clinical cutoff of 1.05. He is also said to have hypermobile joints in his knees, shoulders and ankles." Mr. Phepls also has large hands and feet. Marfan syndrome is an inherited connective-tissue disorder which presents with tall stature, ectopia lentis, mitral valve prolapse, aortic root dilatation, and aortic dissection.

In his book, "Michael Phelps: Beneath the Surface" written by both Phelps and Brian Cazeneuve, he writes about the scare of the possible diagnosis of Marfan syndrome:


"My heart rate was accelerating and Bob suggested I see the doctor. Because I was very flexible and had long hands and feet. I had some early symptoms of Marfan Syndrome, a disease that affects connective tissues and can be fatal if there is leakage to the vessels that lead to the heart. If you reach out your arms and form a T and your wingspan is longer than your height, you can be at risk. In my case, those measurements have always been very close. I didn't know at the time why the doctor decided to look into this. My mom and Bob didn't want me to freak out, so they told me it was simply a good idea for young athletes to have an EKG test in order to look at the heart.

Fortunately everything was, and still is, okay. I have been tested once a year ever since at John's Hopkins under the direction of Dr. Peter Roe and the tissues are strong, the aortic rout is clear and my heart is in good shape - as long as my Baltimore Ravens are winning."

From page 66, Michael Phelps: Beneath the Surface, Google Books.

From the description above, it looks like Michael Phelps does not fulfill the criteria of a full-blown Marfan syndrome according to his doctors. If he were to have Marfan syndrome however, strenuous exercise would be generally contraindicated according to the American Heart Association.

The Age/Yahoo comments on "another bodily trait might also have helped transform Phelps into the perfect, indefatigable swimming machine. In sixth grade, the Maryland native was diagnosed with Attention Deficit and Hyperactivity Disorder and prescribed Ritalin to curb his near boundless energy.

After growing frustrated with the drowsiness caused by the drug, Phelps turned to sport, where the symptoms that so agitated teachers greatly impressed coaches.

"I had so many outlets for energy release. I'd go from a lacrosse game to a baseball game to swim practice," he wrote."

We all want our heroes to be perfect but they never are. Their biggest strength however lies in overcoming their own shortcomings and giving inspiration for millions around the world to do the same.