One of the Google founders, Sergey Brin, started a blog hosted at Google's own Blogger.com called TOO.

Sergey explains that "while Google is a play on googol, too is a play on the much smaller number - two. It also means “in addition”, as this blog reflects my life outside of work.”

In his second blog post, Sergey shares that he has a mutation in the gene LRRK2 which carries markedly higher chance (in the range of 20-80%) of developing Parkinson's disease:


"There is one particular mutation of the LRRK2 gene -- known as G2019S -- that, while rare even among people with the disease, accounts, in some ethnic groups, for a substantial proportion of familial Parkinson's.

I carry the G2019S mutation and when my mother checked her account, she saw she carries it too. It is clear that I have a markedly higher chance of developing Parkinson's in my lifetime than the average person. "

The test was carried out by a firm called 23andMe, the co-founder of which, Anne Wojcicki, is Brin's wife.


"This leaves me in a rather unique position. I know early in my life something I am substantially predisposed to. I now have the opportunity to adjust my life to reduce those odds (e.g. there is evidence that exercise may be protective against Parkinson's). I also have the opportunity to perform and support research into this disease long before it may affect me. And, regardless of my own health it can help my family members as well as others."

According to BBC, "Brin's public disclosure of his genetic test is also interesting. Brin is a very private man but in writing a blog he has exposed his private life in a way we have not seen before."

Many people will appreciate Sergey's candor but they will be seriously shaken by his choice of a color theme for his blog - the dark blue text on black background is barely readable (see the screenshot below): 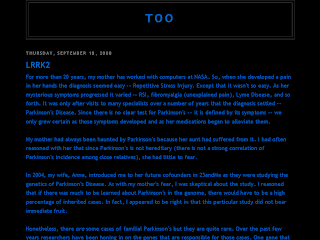 Sergey Brin's blog TOO. The screenshot text has been enlarged.