What is the radiation exposure from full-body scans used for airport security screening? 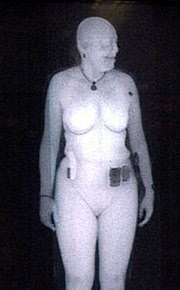 There are 2 types of full-body scanner machines that use "weak" X-rays and radio waves respectively:

The older type of full-body scanners use so-called backscatter radiation to scan the entire body to detect foreign objects. Passengers will be directed to stand against a refrigerator-size backscatter machine as a "pencil-thin" X-ray beam rapidly scans them to produce textured "charcoal outlines" of their bodies. The backscatter uses a narrow, low-intensity X-ray beam that scans the entire body at a high speed. The X-ray is not strong enough to penetrate much beyond the skin, so it cannot find weapons that may be hidden in body cavities.

The amount of radiation used during this scan is equal to 15 minutes of exposure to natural background radiation such as the sun's rays. One scan emits less than 10 microrem, the unit used to measure radiation. Comparably, an hour on an airplane at a high altitude exposes a passenger to 300 microrem, and the average person is exposed to 1,000 microrem of radiation over the course of a normal day.

Thirty hours of airplane travel is the equivalent of one chest X-ray (CXR) - an important health warning for frequent flyers.

A backscatter X-ray scan gives a person as much radiation as he or she would get from two minutes of flying in an airplane at 30,000 feet. A traveler would have to undergo more than a thousand scans in a year to equal one standard chest X-ray.

Dr. Albert J. Fornace Jr., an expert in molecular oncology at Georgetown University Medical Center, said such a low dose was inconsequential, even for pregnant women. “Obviously, no radiation is even better than even a very low level,” Dr. Fornace said. “But this is trivial.” But David J. Brenner, a professor of radiation oncology at Columbia University, said that even though the risk for any individual was extremely low, he would still avoid it.

The newer type of scanners, called a "millimeter wave" machine, doesn't use radiation. It uses electromagnetic waves to create an image based on energy reflected from the body. According to the TSA these devices deliver 10,000 times less energy than a person's cell phone.

The millimeter wave machine works like this: A person walks into a large portal that resembles a that resembles a glass elevator (9 feet tall and 6 feet wide), pauses and lifts his or her arms while the machine takes two scans using radio waves. The scans take 1.8 seconds, and it takes about a minute for the image to appear on a computer screen in a separate location.

The Transportation Security Administration (TSA) promises no one will see the revealing images except trained security agents staring at computer screens in a nearby room. The body scans will be deleted after 12 seconds.

Special “privacy” software intentionally blurs the image, creating an outline of a body that is clear enough to see a collarbone, bellybutton or weapon, but flattens details of revealing contours.

Read more on a Kindle:

Labels: Radiology
Email ThisBlogThis!Share to TwitterShare to FacebookShare to Pinterest