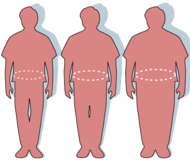 A hearty laugh and a moderate workout may have more in common than anyone thought.

Both affect the appetite hormones in much the same way:

That is what typically happens after moderate exercise.
Leptin (from Greek, leptos, meaning thin) is a protein hormone that plays a key role in regulating energy intake and expenditure, including appetite and metabolism. Leptin acts on receptors in the hypothalamus of the brain where it inhibits appetite.
Ghrelin is a hormone that stimulates hunger. The name is based on its role as a growth hormone-releasing peptide, with reference to the root "ghre", meaning to grow. It is produced by the cells lining the fundus of the stomach and epsilon cells of the pancreas. It is considered the counterpart of the hormone leptin, produced by adipose tissue.
Twitter comments:

@doctorwhitecoat This explains why I'm always so hungry.
@scanman That explains why I eat too much when I party with friends.
References:
Laughter Affects Appetite Much Like a Workout Does. WebMD.
Image source: Wikipedia, public domain.
Posted by Author on 12/30/2010