The First Journal Club on Twitter - Then and Now

I think we started the first medical journal club on Twitter at the Allergy and Immunology program of Creighton University back in 2008. Please let me know if you are aware of an earlier journal club focused on medical articles and broadcasted or held exclusively on Twitter prior to that date. We published an abstract at the annual meeting of the The American College of Allergy, Asthma and Immunology (ACAAI) in 2009, with collaborators from Creighton University, Louisiana State University (LSU) in Shreveport and Cleveland Clinic. The abstract and the poster are embedded below:

Internet-based services are an important source for communication and reference information for fellows in training in allergy and immunology. Our aim was to explore the utility of the free microbloging service Twitter.com to make the journal club educational activity more interactive.

We used the text message and Internet interfaces of the free microblogging service Twitter (http://twitter.com/) owned by Twitter, Inc. to post updates and summaries from the journal club activities at an Allergy and Immunology fellowship training program at an academic center. The updates were posted on a web site provided free of charge at http://twitter.com/AllergyNotes and simultaneously distributed to the cell phones of subscribers via text messages. The web site was freely available and comment were open to visitors. One fellow in training was assigned to update the microblogging service from his cell phone with the label "#JCAllergy" for easy referral and later retrieval from the Internet search interface.

Five articles were discussed during a 2-hour journal club teaching session and 24 updates with links were posted on Twitter.com. The updates were followed in real time by 2 fellows at an Allergy and Immunology training program in a different state (not physically present at the meeting). Five fellows (out of 7, 71.4%) at two training programs expressed a favorable opinion of the use of the microblogging service to post updates from journal club.

The microblogging service Twitter can be used to share information from journal club in allergy and immunology and thus serves as an easy to implement form of distant learning for trainees and community allergists. The service is free to use and requires minimal equipment limited to an Internet-connected computer or a basic cell phone (not a smartphone) with activated text messaging service. A potential limitation of this approach may be the distractions that the reporting journal club participant may experience while simultaneously sending text messages and listening to the presentations. Twitter allows an immediate feedback from the journal club participants, following the updates from remote locations, which can enhance the educational aspects of this activity.

The concept of a journal club on Twitter has its own limitations inherent to the publishing medium and the enthusiasm of the participants. After a few months, we decided that the concept was interesting but ultimately the discussion of a journal article requires more than 140 characters.

In June 2011, a medical student and a junior doctor in the UK launched the idea of a journal club exclusively on Twitter. The social network and publishing medium of Twitter has grown tremendously from approximately 40 million accounts in 2008 to 150 million in 2011. The networks mass effect and the infectious enthusiasms of the two founders ensured a large participation in this new journal club on Twitter: http://twitjc.wordpress.com

I wish them best of success in this new educational endeavor. I think it is a great effort and it should be strongly encouraged.

My general comment on the 2008 concept, and this new 2011 version of journal club on Twitter, was that “we need to go beyond this 1950s model rather than adapt it to social media”. To be exact, Sir William Osler established the first formalized journal club at McGill University in Montreal in 1875 (http://j.mp/aGEvB0), but the concept itself seemed to get traction after the 1950s.

I think it would be a good idea to ask the participants themselves what they would like to see in a journal club on Twitter, i.e. "crowdsource" the community. This can be done via a Google Forms poll with a free text option for additional suggestions.

Dr. Stuart Flanagan tweeted that this could be an opportunity to develop or even reinvent the Journal Club model, and it could be a very exciting project. I agree, and will try to add a few specific ideas in a future blog post.

In addition, Twitter may not be the best way for article discussion. It is just the popular tool at this time. Google Buzz is an alternative service that works well for this purpose but the major problem is that very few people use it. Buzz is a better medium than Twitter for a journal club from a technical point of view. It is easier to follow the conversation threads - this is one its main advantages and Facebook has it too. The search function of Buzz works well while Twitter Search traditionally “forgets” tweets older than 7 days.

Please have a look at the transcript of the first edition of #twitjc and you will realize how challenging is to follow a conversation on Twitter: http://www.scribd.com/doc/57191306/TwitJC-Transcript-5-6-2011

Reading a 30-page Twitter chat transcript with all @ handles, hashtags and timestamps included is not for everyone. Some editing of the transcript would make it more readable. We tried this with the original journal club in 2008, on a much smaller scale of course: http://allergynotes.blogspot.com/2008/12/allergy-and-immunology-journal-club-on.html

How about Journal Club on Facebook? I don't think that JC on either Facebook or Twitter (or blog comments) take the concept to a fundamentally new level.

In any case, Cleveland Clinic, ever the innovator, actually has a Journal Club on Facebook. Dr. Neil Mehta wrote a great summary on their model, using Google Reader and Facebook, check it out here: http://goo.gl/rnw2P 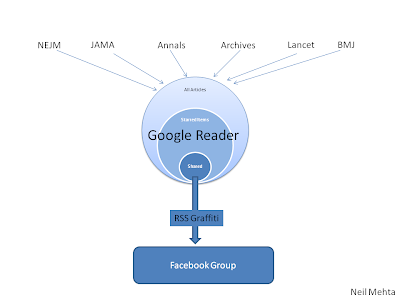 In conclusion, from personal experience, I would say that you can only learn when people criticize your project - it is the most helpful kind of feedback that you typically get for free.

@DrVes: Did you find #TwitJC useful? @EugenieReich is looking for scientists to be interviewed in Nature. I think the second event was very engaging and useful. That said, #TwitJC is more a Twitter chat on a topic/article rather than a Journal Club as we think of it in the U.S. This brings me to the third tweet on the topic: Do we need separate #meded tags for different parts of the world? http://bit.ly/maPEwm

@amcunningham: well, it's a journal club the way we think of it in the UK... A noisy, hectic one!- but gets the job done :) #TwitJC

@DrVes: Right. Different from what we typically do here, e.g. discuss every detail of a recent (very recent) article, focused on one topic.

Virtual Journal Club for Hospital Medicine by the Washington University in St. Louis