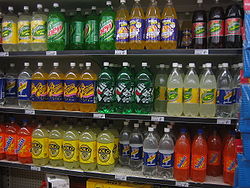 The average American consumes 45 gallons of soft drinks annually. This does not include noncarbonated sweetened beverages, which add up 17 gallons a person per year. Chips and Coke are a common breakfast.

Nearly a third of American children are overweight or obese. In our inner cities a prevalence of obesity of more than 50% is not uncommon. Too many calories in, too little energy out. An 18% tax on pizza and soda can decrease U.S. adults' weight by 5 pounds (2 kg) per year, according to some researchers.

Here are some ideas how to promote healthy diet from from the NYTimes:

- convert refrigerated soda machines to vending machines that dispense grapes and carrots, as has already been done in Japan

The solution: Tax Soda, Subsidize Vegetables? NYTimes.
Timeline of the Standard American Diet in the NYTimes.
18% tax on pizza and soda can decrease U.S. adults' weight by 5 pounds (2 kg) per year
The long history of dieting fads: "soap should be eaten for its diuretic properties", wrote a prominent surgeon in 1810. Lancet, 2012.
How We Eat: Analyzing Half a Million Meals - 5 INFOGRAPHICS
Top diets of 2012 - from Cleveland Clinic health blog http://buff.ly/X2I4BJ
'To Burn Off Calories in This Soda, Walk 5 Miles' - new label http://buff.ly/1vzbCKH
Image source: Soft drinks, Wikipedia, public domain.


@drjohnm (John Mandrola, MD): Call me simple, even progressive; yet it's hard 2 oppose a soda tax.


@DrJonathan (Jonathan,DO,MS,NCC): I'm against soda as much as anyone. But, this is America. People should have the right to make their own food/beverage choices.
Comments from Google Plus:

Jamie Rauscher - Mark Bittman makes some excellent points. Taxing unhealthy foods may help (studies have shown cigarette taxes can discourage smoking) but it is not the complete solution. We must continue to educate people too about the importance of eating at home. The amount of time people spend preparing meals continues to decline. (See report "Who has time to cook?" by US Economic Research Service) Many people also no longer know how to cook. Finally we need to teach nutrition to children and adults. I recently completed a nutrition class in a graduate program at Boston University. It was a real eye opener--and I thought I was pretty knowledgeable going into the class.
Posted by Author on 10/14/2011

Labels: Food
Email ThisBlogThis!Share to TwitterShare to FacebookShare to Pinterest