This Week's Grand Rounds is Hosted by NHS Blog Doctor

Check out Grand Rounds, the weekly summary of the best posts in the medical blogosphere.

Grand Rounds (GR) has become the contemporary weekly portrait of medicine through the eyes of the medical bloggers. Pre-Rounds is an article series about the hosts of Grand Rounds on Medscape.com. Nick Genes of Blogborygmi, who writes the Medscape column, is the founder of GR and the archive host. I have hosted Grand Rounds 2 times in the past but have not been able to find time to do it again in recent months -- it looks like a deceptively simple task but it takes a lot of work. 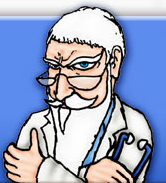 This week's edition of GR is compiled by the venerable NHS Blog Doctor -- one of the most popular medical blogs and a well-established institution on the other side of the Atlantic, with its own economic, scientific and political advisers. There is even an American correspondent and, who knows, the blog may one day become something like a mix between the BBC and the TIME magazine. The Blog Doctor caused a lot of concerns when he went on hiatus a few months ago, complicated by fake comments about his premature demise. Luckily for all, the good old (?, judging by the blog header picture) NHS Blog Doctor is back, better than ever, with a huge and well-illustrated edition of Grand Rounds. Spare at least an hour of your time to check the latest and greatest posts from the medical blogosphere.