Do We Need a Free Medical Encyclopedia? 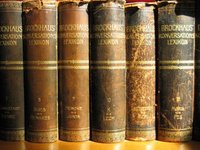 The answer is clearly yes. Although Google works fine, sometimes you just want to check the facts in Wikipedia, and you type "example + Wikipedia" in the search box instead of browsing through 10 million results.

There are two approaches to creating a medical encyclopedia.

WebMD owns Medscape and it just acquired eMedicine. The content offered by this medical media conglomerate is peer-reviewed, up-to-date and generally of good quality. The former JAMA editor George D. Lundberg, MD discusses the new acquisition in WebMD, Medscape, eMedicine, and the Relevance of a Medical Encyclopedia in 2006 (free registration required)

Wikipedia has a Medicine portal which is growing fast and it is free to copy, as opposed to the WebMD offering, which is copyrighted. For exampe, I often use Wikipedia images to illustrate posts on this blog. I cannot use the WebMD copyrighted images.

Just recently, a few U.K. and Australlian doctors launched a wiki-based textbook of medicine which can be edited by any registered medical practitioner willing to do so, and which may be copied and redistributed unchanged non-commercially by anyone. The problem is that the name (Ganfyd) is impossible to remember and this effort duplicates the Wikipedia Medicine project to a large extent.

"Ganfyd is an old medical mutterance whose meaning is known only to the initiated." Really?...

Also, the contributions are limited to "doctors registered with the General Medical Council (UK) or the equivalent bodies in Canada, Australia or New Zealand." This leaves out more than 800,000 U.S. doctors who are potential contributors to the Ganfyd wiki project.

The idea of creating an open wiki-based textbook of medicine is a a good one and it will be implemented in one form or another.

Nothing beats the simplicity of typing your question in Google and getting the answer within the first 10 results...

UBC Google Scholar Blog writes that "medical search on the Web is an untapped market, both on the consumer and physician side of the equation. We are still waiting for that next great thing."