Grand Rounds is a weekly summary of the best posts in the medical blogosphere. Pre-Rounds is an article series about the hosts of Grand Rounds on Medscape.com. Nick Genes of Blogborygmi, who writes the Medscape column, is the founder of Grand Rounds and he maintains the archive.

This week's Grand Rounds is loosely structured in a "medical journal format" using the table of contents of one of my favorites -- the British Medical Journal:

It is fascinating to see how Grand Rounds has grown over the years and has become an amazingly diverse collection of the best posts in the medical blogosphere. The statistics at the end of this issue provide a snapshot of the Grand Rounds' participants. In conclusion, I would like to say just one thing: keep on blogging, you make the web a better place.

Global Survey of Healthcare Bloggers
As announced in a previous edition of Grand Rounds, The Medical Blog Network and Envision Solutions, LLC are running the first global survey of healthcare bloggers. The final survey results will be presented during Healthcare Blogging Summit 2006 in Washington, DC. Please take a few minutes to complete the survey before the deadline on 9/29/06.

Uninsured Children
Despite what one might read, fewer children are uninsured now as compared to 1994, writes InsureBlog. According to a new study, state-mandated initiatives seem to be picking up steam.

Huffing in Alaska
According to Tundra Medicine Dreams, huffing is the most common form of substance abuse in rural Alaska. Huffing and sniffing are forms of inhalant abuse, sometimes known as “solvent abuse” in other parts of the world.

Stung by a Bee
Medicine for the Outdoors reviews what to do in case of a bee sting.

Neuromuscular Blockade
Inside Surgery has a 3-part series on the neuromuscular blocking drugs that are used to paralyze patients during general anesthesia and surgery.

Cervical Cancer, Vaccines, and Jackalopes
Aetiology discusses the strange route of discovery of the Human papilloma virus (HPV) and the vaccine against it.

NSAIDs Use in Pregnancy Linked to Cardiac Abnormalities in Babies
Straight From The Doc comments on a study which suggests that NSAIDs intake in the first trimester of pregnancy may lead to
congenital heart abnormalities, particularly septal defects.

Biological Pacemakers Using Gene Therapy
The BioTech weblog: "Two independent groups of researchers are making progress in the use of gene therapy to develop biological pacemakers."

Meeting with DNA Direct
Many blogs are prominently featured in the search engine results and are consequently becoming a target for PR departments of different companies. Hsien Hsien Lei of Genetics and Health writes about her meeting with the representatives of DNA Direct, a direct-to-consumer genetic testing company. There is a much-needed disclaimer: DNA Direct picked up the tab for the cafe lunch.

Medical School "Pimping" and Silverback, MD
A medical student describes the "art of medical school pimping" which can degenerate into simple bullying: "So I'm standing in a jungle of knowing nothing when along comes Silverback, MD... The doctor started to ask questions, slapping me around with his paws. I made the mistake of answering correctly, which is like eye-contact to them. He batted me harder, asking about all sorts of random things to throw me off any balance I pretended to have until I fell, incorrect." NYTimes and Kevin, M.D. also commented on this social phenomenon.

Jerk Consultants and Telephone Etiquette
GruntDoc: "The consultant who generates an acrimonious relationship with the ED is not doing himself or his patients any favors. We need each other to take effective care of our patients. And boorish behavior is for boors, not Physician Colleagues."

There Is No Such Things As Bloodless Surgery
Robotic Surgery Blog: "Any surgery which involves any incision has the potential to lose blood. There is no such thing as bloodless surgery in the sense that blood will not be lost. I think the term should be transfusion-less surgery as a more accurate, but maybe less marketable term."

A Memorable Patient
Surgeon's Blog: "I talked about a Whipple in my book: it's every surgical resident's dream: the full-meal deal, the three-ring circus, the Superbowl of surgery. It involves about every trick up the sleeve of a general surgeon: removing some stomach, some bowel, some bile duct, some pancreas, the gallbladder."

Judge Not. Unless It's Your Job.
ImprobableOptimisms writes about the pitfalls of first impressions in the ED.

How to Choose a Primary Care Doctor
In My Humble Opinion blog has a long list of tips on how to pick a primary care doctor and get the most out of your appointment.

When a Patient Commits Suicide
Musings of a Distractible Mind shares his feelings about a patient who unexpectedly committed suicide: "It is something many of us have experienced. As a physician it is easy to get caught up in the "what if" game, second-guessing whether there was anything you could do. You must resist this temptation, while also not totally suppressing the real human emotions you feel." More from Pubmed.

Hanging On For Dear Life
Emergiblog writes about a memorable patient.

Patient Records Up For Auction?
MSSP Nexus Blog comments on an ad that appeared in a local newspaper about a month ago: "Up for auction in Norton, Ohio: Physician's office furniture, patient files and records." It is of particular interest to physicians who are considering closing a practice.

Deconstructing Evidence-based Medicine
Respectful Insolence explains why he is annoyed by a journal article and dispels several myths about evidence-based medicine.

Electronic Medical Records Under Senate Scrutiny
Enoch Choi covers the NYT article "Smart Care via a Mouse, but What Will It Cost?" and considers the cost of EMR a good investment in our health.

Let's Help the Tobacco Companies!
California Medicine Man does not believe in conspiracy theories but he wonders why the level of nicotine in American cigarettes has increased by 10% over the 6-year period between 1998 and 2004 and the public was never informed.

Fear of Developing Dementia
The Tangled Neuron takes the Lancet Neurology test which aims to predict to risk of developing dementia in 20 years among middle aged people.

ED Video
ImpactEDnurse: "People often ask me why I continue to work in the Emergency Department despite the ongoing hazards of overcrowding, access block and the high stress levels. Its a difficult question to answer in words. A while ago I tried to answer it in a video clip…."

Why I’m Not a Numbers Girl
A twenty-something writer's take on life with chronic illness: “You have a 75 percent chance of not being able to have children on your own,” the fertility specialist told me... When I look at such a sampling of numbers, I am reminded why I am not and never will be a numbers girl. I cannot add all those parts up and get a whole me..."

Manic Monday
When i grow up blog reminds us that no matter how bad we feel about ourselves, the things are often worse on the cold end of the stethoscope where the patient is.

Anne. Nurse Extraordinaire.
Malcolm's Lab Space: "This is a story about a nurse I met who practiced in a rural center that had infrequent doctor visits. I wrote this fictional account of what I imagined her first day would be like."

Frustration
Neonatal Doc shares his concern: "Last week I saw a 24 year old mother having her fifth child and ninth pregnancy, and today I talked to a 23 year old mother who just had her third baby after her ninth pregnancy. Nine pregnancies by age 23?..." Practice of medicine is never easy for both logical and emotional reasons. Neonatal Doc, who works an urban area of the Midwest, feels that the more he practices and studies medicine, the less he knows.

Art and Life
HealthyConcerns.com discusses genetic testing and selecting embryos which is is the subject of both the latest novel she read and a recent NY Times article.

Building
A poem by the author of the blog In My Humble Opinion.

Questions on Evidence-based Medicine
Naomi of TMBN is planning a radio show on the pros and cons of evidence-based medicine: "I plan to tape the show, so at some point it may get uplinked to the web. Answers from professionals and non-professionals are encouraged."

Miss Mallard and Medical School Interviews
A medical student gives advice on how to flunk the admission interview. 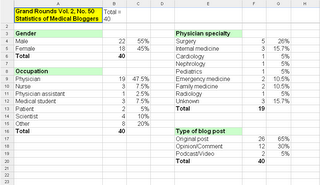 This is a Google Spreadsheets summary of the bloggers/posts in Grand Rounds, Vol. 2, No. 50. Male bloggers, at 55%, were slightly more than female bloggers. Most of the posts were submitted by physicians (47%), nurses (7%) and medical students (7%). Among doctor bloggers, surgeons (26%) and internists (15%) were predominant. Most of the posts were original (65%) as compared to opinions/comments on medical news (30%) .


Check out Grand Rounds next week

The host of next week's Grand Rounds is Amy Tenderich of Diabetes Mine.
Posted by Author on 9/05/2006