The intravenous therapy, ATryn, is purified from the milk of the genetically engineered goats.

Antithrombin (AT) is a small protein molecule that inactivates several enzymes of the coagulation system. It is a glycoprotein produced by the liver and consists of 432 amino acids. 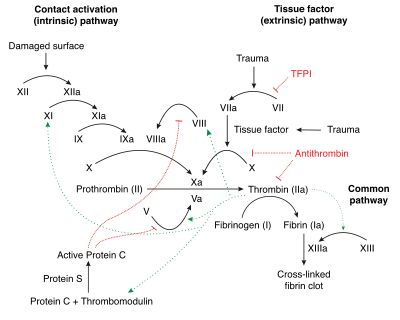 Antithrombin is a serine protease inhibitor (serpin) that degrades the serine proteases: thrombin, FIXa, FXa, FXIa, and FXIIa. It is constantly active, but its adhesion to these factors is increased by the presence of heparan sulfate (a glycosaminoglycan) or the administration of heparins (different heparinoids increase affinity to FXa, thrombin, or both).

Quantitative or qualitative deficiency of antithrombin leads to thrombophilia. Hereditary AT deficiency occurs in a small population (approximately 1 in 5,000 people in the United States). The first family suffering from inherited antithrombin deficiency was described in 1965. These patients are at high risk of blood clots during medical interventions, such as surgery, and before, during and after childbirth.